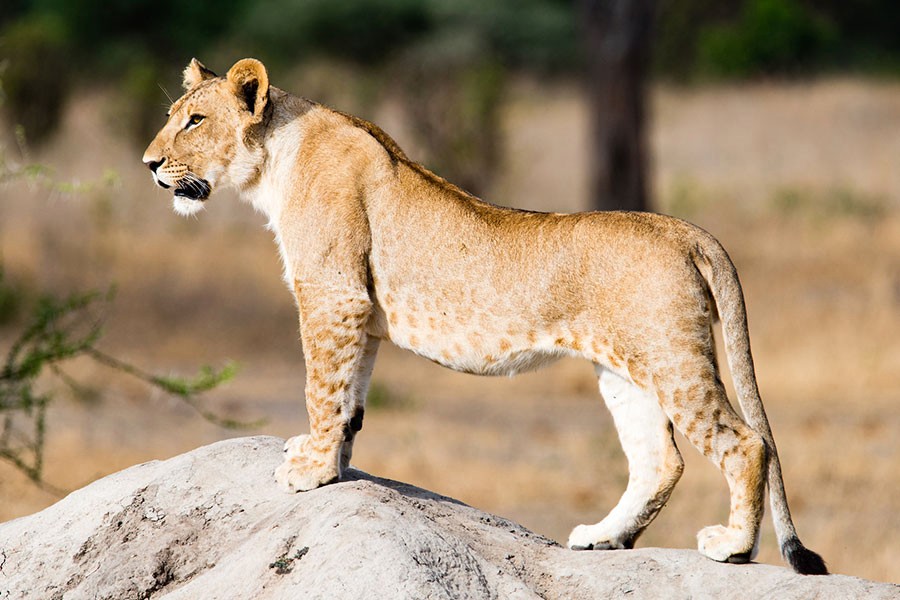 Lions are one of the most popular animals in Africa, and Tanzania is one of the best places to see them. Tanzanian lions are known for being particularly large and healthy, and the country’s parks and reserves offer some of the best safari experiences in Africa. If you want to see lions up close and personal, Tanzania is the place to go.

Tanzania is home to the largest population of lions in Africa

Tanzania is a land of vast, diverse habitats, from the plains of the Serengeti to the calderas of Ngorongoro. With nearly 25 million hectares of protected areas, it’s no surprise that Tanzania is known for its incredible wildlife populations. One species in particular that Tanzania is renowned for is lions, with an approximate 14,000 – 15,000 living in the wild. There is evidence to suggest that their population has been growing steadily since 2010, despite threats from human activities such as poaching, urbanization, and conflict with farming communities. Not only is lion tourism an important source of revenue for Tanzania and its people, but it’s also a key factor driving conservation activity in the country. Tanzania now boasts the largest lion population in Africa, making it a top destination for predators enthusiasts who come from all over the world hoping to catch a glimpse of these majestic beasts in their natural habitat. With careful management and monitoring, hopefully this trend can continue so that future generations have an opportunity to witness the beauty and grandeur of these remarkable animals in their native home.

Going on safari is an experience like no other. As the sun sets and the African landscape around you is bathed in a golden glow, there’s no telling what might be waiting over the next hill. It could be a towering elephant or an elegant gazelle – but it could also be a mighty lion, king of the jungle! Lions are one of the most iconic animals to see in their natural habitat. Watching these powerful cats commanding their territory with silent majesty can take your breath away. That’s why so many people choose to go on safari: for the chance to observe lions as they roam and hunt their prey in uninterrupted freedom. Along with other majestic creatures such as rhinos and cheetahs, you can create memories that will last a lifetime by seeing these animals up close in their own environment – it’s a unique opportunity to connect with nature. So if you’re looking for an adventure that will never be forgotten, going on safari should be at the top of your bucket list!

Lions are often found near water sources, so look for them near rivers and lakes

When observing wild lions in their natural habitat, it’s important to remember that they can turn up almost anywhere. But the reality is that these majestic creatures tend to prefer areas with access to a reliable water supply, such as rivers and lakes. Lions will use the rivers and lakes for drinking, bathing and hunting – so if you’re searching for a lion you should begin your investigation near water sources. This is especially true of prides living in dry climates – like Africa’s Serengeti plains – where reliable sources of surface water are often scarce. A pride of lions may travel for miles when searching for food, but its members are more likely to be found near some sort of water body in which to refresh themselves during their journey. Some African countries even have wildlife reserve areas specifically designed to provide safe watering points for animals like lions. So if you want the best chance of seeing the king of beasts, grab your binoculars and start inspecting around nearby rivers and lakes! You’ll likely be rewarded by the sight of one or two magnificent creatures basking in the African sunshine. Just remember that safety always comes first – be sure to stay at a distance from any wild lions you may encounter!

Be sure to take plenty of pictures when you see a lion!

Seeing a lion in the wild can be one of the most exhilarating experiences imaginable – a majestic animal, prowling through its natural habitat, powerful and awe-inspiring. For this reason, it’s important to take plenty of pictures when you have the chance! Of course, it always pays to be mindful of safety concerns and make sure to give the lion its space. If viewing from a vehicle, pay extra attention not to disturb them. When taking pictures, look for unique angles that capture both what the lion is doing and their natural environment. Depending on the light available, don’t be afraid to experiment with shutter speed or aperture settings too! With a few well-timed shots, you can create memories that last a lifetime – memories that are impossible to put into words! So when you’re lucky enough to see a lion in the wild, don’t forget your camera and don’t spare any shots – after all, you may never get another chance like this!

If you’re looking for an amazing safari experience and the opportunity to see lions in their natural habitat, look no further than Tanzania. With its large populations of lions and plethora of beautiful landscapes, Tanzania is a must-see destination for any nature lover. Be sure to take plenty of pictures when you spot a lion – they are truly awe-inspiring animals! And if you want to learn more about these magnificent creatures before your trip, be sure to read up on them online.