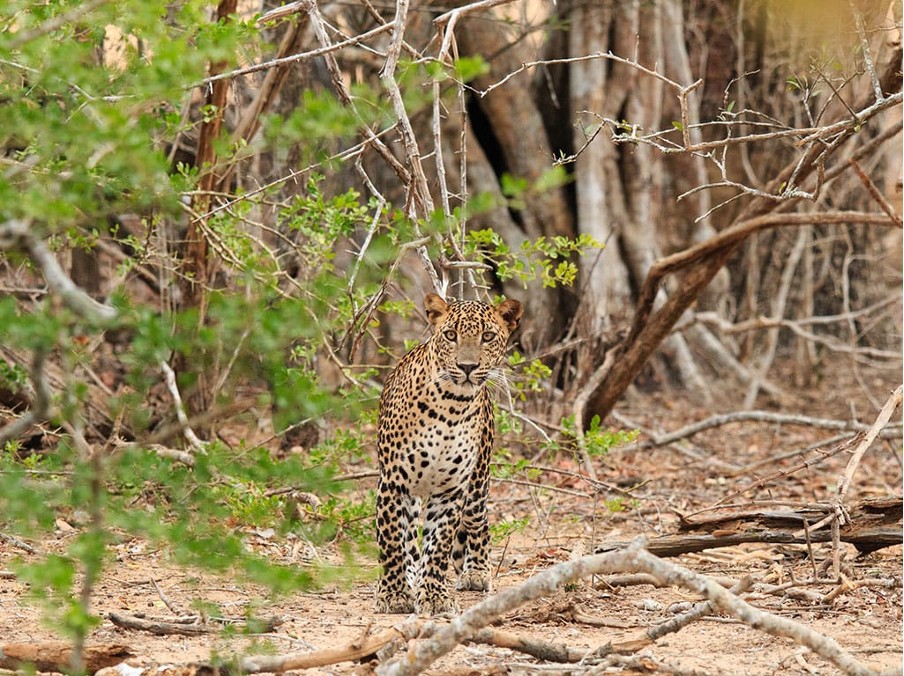 Planning a trip to Yala National Park? From frequently asked questions about the park to hotels in Yala, Sri Lanka, here’s useful info to help you plan your holiday!

What’s Yala All About?

Located in the southeast of Sri Lanka, this national park is one of the most famous and most frequently visited ones on the island.

It borders the Indian Ocean and its flat plains are covered mostly in reddish brown soil; the whole area is also largely composed of prehistoric rock (metamorphic rock, to be precise, which dates back from hundreds of millions to billions of years ago).

But, what most attracts the hundreds of thousands of visitors to the park each year, is its wildlife.

The park is home to hundreds of species of wildlife, including endemic ones such as the Sri Lankan Leopard (a glimpse of which is usually considered the main highlight of a safari at the park).

If you’re an avid bird watcher, you’ll also be glad to know that it has a range of endemic and migratory birds (Yala is one of the Important Bird Areas on the island).

Other wildlife that you should keep your eyes peeled for are elephants, sloth bears and the Sri Lankan Sambar Deer.

What are the Most Popular Hotels in Yala?

Being Sri Lanka’s second-most visited national park, Yala has been one of the leading tourist hotspots in the country for decades and plenty of accommodation options have cropped up to cater to the park’s visitors.

Some of the most popular hotels in Yala, Sri Lanka according to Agoda.com and Booking.com are:

How Much is a Hotel in Yala for the Night?

The rate varies according to the hotels’ star ratings; you can find stays in the USD 100 to USD 700 range per night.

Of course, if you manage to snag a deal, you can lock in very competitive rates – keep an eye out for offers not only on sites like Agoda.com but also on individual resorts’ main offer pages such as this one.

What are the Best Hotels in Yala for Couples?

A romantic Yala holiday calls for something more than standard hotel accommodation.

If you’re envisioning lazy days spent in the cooling embrace of a private plunge pool with your significant other, options like Uga Chena Huts are perfect.

The hotel’s luxury huts offer the perfect mix of comfort, seclusion and breathtaking wilderness and seascape vistas; all while keeping you connected to all the modern conveniences you would desire.

What is the Best Safari in Sri Lanka?

You bet it’s this one! Yala’s wildlife safaris are arguably the best on the island. They’re certainly one of the longest continuously operating safaris over the past several decades (due to the Civil War that ended in 2009, the country’s largest national park, Wilpattu, was closed for around a quarter of a century up until a decade or so ago – but Yala remained open).

A real treat is being able to spot one of the resident leopards. The Sri Lankan Leopard, or Panthera Pardus Kotiya, is a subspecies of leopard endemic to the island.

Yala is known for having one of the highest leopard population densities in the world.

Which Block is Best?

Yala National Park is quite massive, so it makes sense that it’s split into five blocks. Of these five, you can currently only visit two of them.

The best block to visit tends to be block one (which goes by the name of ‘Ruhuna National Park’). This is the one that’s been open to the public the longest. So the wildlife here is generally less skittish around safari jeeps. There are also 50+ leopards in this block, which improves your chances of actually spotting one during your drive!

How Much Does a Yala Safari Cost

Depending on the safari tour operator, rates do vary. But you can expect to fork out anything from  USD 30 – USD 100 per person for a safari that lasts around half a day (4 to 5 hours).

This usually includes a designated driver / guide and covers entrance fees at the park and pick-up / drop-off to and from your hotel. Sometimes, it also includes complimentary water and snacks.

How Do I Get to Yala?

While there may be many ways to reach Yala (you can use a combination of the local bus and rail networks and private vehicle hires etc.), perhaps the better question might be,  how fast can you get to Yala?

The park lies on the southeast coast (more south than east), whereas the main airport and commercial capital, Colombo, lie on the west coast (more west coast than the southwest). So, from the Bandaranaike International Airport, or Colombo, it will take you a drive of around 5 hours to reach Yala National Park.

To save precious hours during your holiday, consider travelling by air.

A domestic flight can fly you southwest to the city of Hambantota (about a 45-minute journey); from there, you can reach the park in under an hour’s drive.

What Should I Wear on a Yala Safari?

Make sure to pack: